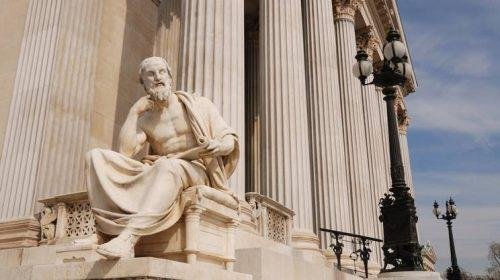 Wine in antiquity speaks of it Herodotus

The origin of wine in the foothills of the Caucasus.

There is the undoubtedly authoritative testimony of Herodotus. The Greek historian  in fact tells many details about the transport of wine to Babylon by river along the course of the Euphrates, which rises in the Caucasus range, the same as Mount Ararat, and descends joining the Tigris to flow into the Persian Gulf.
The boats were made of frames of willow branches and stretched skins, they carried barrels of palm wood filled with wine. In Babylon, once the goods were unloaded, the boatmen retrieved the skins and returned by land, on the back of a donkey, to the place from which they had departed, where they built other boats to resume the journey.
The testimony of HERO is confirmation that wine has always been one of the most important elements, along with spices, precious metals and artefacts, of all forms of trade.
Numerous shipwrecks have been found in the Mediterranean, especially in the eastern Mediterranean, with their cargoes including wine amphorae. The traffic currents connected the land of Canaan, roughly the present day:
Strict laws governed the matter.

From the code of Hammurabi, the king who ruled in Babylon between 1792 and 1750 BC, it seems that the wine trade was reserved for women, with heavy responsibilities.
There was, in fact, a death penalty if a saleswoman got the bill wrong or if she failed to report conspiracies or misdeeds to the authorities by the owners of her establishment. Terrible, finally, was the penalty for a priestess who dared to go drinking in a serving of wineShe was burnt alive.
In contrast, the ITTITA code was less rigid, even though it devoted a whole paragraph to the wine lawsin fact, the protection of the vineyards was very strict and provided for harsh penalties for those who let their flocks of sheep into the vines.
In numerous tombs of ancient Egypt, we find the ceiling decorated with paintings depicting bower vines laden with grapes.
They were the tombs of dignitaries in charge of the control and production of wine or, more simply, of people of a certain rank who loved wine. In some cases, the pergola is meant to depict the place where the aristocrat or dignitary spent his time.
In the tomb of TUTANKHAMON, the young pharaoh of the New Kingdom (1500 BC), were found wine amphorae sealed with dog caps and clay where were engraved, in addition to the year of the grape harvestThe name of the owner and the cellarer responsible for the product, as well as a series of information that we could read today on a modern label.
Did you like this article? Share it! 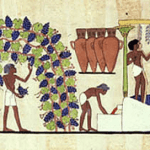 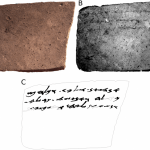